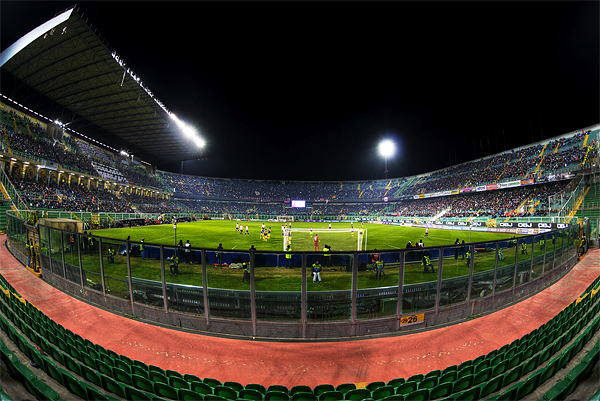 Stadio Renzo Barbera (previously and still commonly known as Stadio La Favorita) is a football stadium in Palermo, Italy. It is currently home of U.S. Citta di Palermo football team. The stadium was inaugurated on January 24, 1932 and was named Stadio Littorio in homage to the Fascism. The opening match was Palermo vs Atalanta, with Palermo winning 5-1. A track surrounded the pitch and there were no stands behind either goal. In 1936, the stadium was renamed Stadio Michele Marrone, in memory of a soldier killed during the Spanish Civil War. The name was changed again at the end of World War II to Stadio La Favorita, from the name of the nearby ancient game preserve of Frederick II, Holy Roman Emperor in the 13th century.

In 1948, the track was removed and stands behind each goal were built. In 1984, the second main redevelopment took place, involving the addition of a second tier to the stadium which increased capacity to 50,000 spectators. This higher capacity was however completely covered in only twice, respectively in a Serie C1 league match against Messina and a friendly match against Juventus. A third redevelopment ended in 1990, the last main one to which the venue was subjected and was undertaken due to city of Palermo having been chosen to host a number of the 1990 FIFA World Cup First Round matches. Due to this redevelopment, the capacity of the stadium was lowered to its current 37,619 seats.

On September 18, 2002 the stadium was renamed as Renzo Barbera, past chairman of Palermo in the club’s last Serie A tenure, as well as the two Coppa Italia finals throughout the 1960s and the 1970s, who had died that same year on May 19. In the Serie A 2004-05 campaign, which marked the first Palermo appearance in the top division in over 30 years, all seats in the stadium were already assigned in the summer to season-ticket holders. However, this was not repeated in the next years.

Plans were recently announced by current Palermo chairman Maurizio Zamparini in order to build a new stadium to be owned directly by the club.